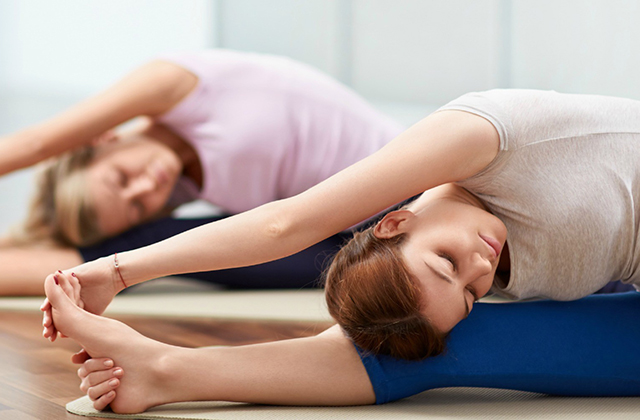 Managing stress poorly will result to some illness, you can start investing your time at Dynamic Pilates Manly. Is it possible to write a favorable review of a book (“Yoga Nidra for Complete Relaxation and Stress Relief”) whose author traces the idea to write the book to an astrological reading? What if, in addition to that, the book is about a discipline that I have attempted several times, unsuccessfully, to enjoy? Yes, over the course of at least half a century, my dabbles with yoga has been uncomfortable, difficult to impossible and off-putting. Of course, the operant word here is “dabbles”-I admit that all such feeble attempts lacked conviction and perseverance.

A barrier between yoga and me is that it often seems steeped in mysticism, spirituality and/or New Age babble.

As if this were not enough, beginning to read what Julie had written, I poured over 14 pages of blurbs for the book and the author’s acknowledgements section. These extensive prefatory pages did not mitigate my preexisting reservations. Imagine-25 testimonial blurbs replete with suspect phrases and terms, including “ancient teachings, Eastern traditions, spiritual reflections, vinyasa practices, sankalpas, koshas, mudras and union with oneself.” Yike. What was I in for?

In any event, something happened that led to a new perspective on yoga. It started with a chance encounter, one that, however unlikely, involved yet another experience of taking a yoga class.

Less than a week before I began reading Julie Lusk’s words about yoga nidra (not just the blurbs and acknowledgements sections), I signed up for a yoga class. Not just any yoga class, but one geared to the (very) young. This came about when I was invited to accompany my wife’s grandson to a class across the street at our local art institute.

What could go wrong? Maybe I’d get insights about yoga to help with the review of Julie’s book.

Upon arrival, I looked around at my fellow classmates. I sensed I was in the right place. I have a competitive nature and could not help but notice that I had at least 70 years on everyone in the room, except for the parents. (With them my advantage was only about 50 years). I figured I could use this experience and a bit of cunning to stand out, to crush the little tykes with athletic moves. If running about in circles were involved, I’d exhaust the tots with endurance and speed.

Oh, I know yoga is not supposed to be competitive, nor should the gifted flaunt their prowess, but being a one-time class superstar would be harmless fun, I suspected. Who knows, maybe I’ll be invited to teach the next class.

Well, things did not turn out that way. In fact, the opposite proved true. The five to seven-year-olds effortlessly performed poses I suspect were copied from Cirque du Soleil. When, 20 or so minutes into the contortions, the teacher instructed everyone to leap up and run around the room, I struggled to my feet. I had barely begun to lurch forward when a hoard of tots came charging by on their second loop around the room.

When the bell rang giving near-sacred relief, I was exhausted and sore. I knew for sure, after one last failed attempt, that yoga was not for me. How could I give a glowing review, as was my desire, to Julie’s book?

Encouragement from the Author

I sent an e-mail to Julie, mentioning that in order to get in the proper frame of mind to review the book, I had accompanied my wife and grandson to a kid’s yoga class. I mentioned that it was much harden than any triathlon I did last year. I enclosed two photos taken during class.

These pictures made my day!!! Yoga is all about joyfulness-and you and your family found it, judging from the looks on everybody’s faces, especially the little tyke. His grin gives me a grin every time. As for you, I’m happy you’re taking a dip. But the teacher in me can’t resist, especially when it comes to safety. See how your knees are… well up around your ears in sitting? To protect your knees and keep the proper curve in your back, they need to be below the hip crest or touching the floor. They’re probably up there due to tight hamstrings from all the other good stuff you do. The answer is simply to sit on cushions to lower your knees. Gotta take care of those knees! Doing hip openers will help too, but that’s a long-run solution. But once again, “real” yoga is ultimately about unconditional joy. BTW, the only posture needed for what’s in my book is lying on your back.

I predict it could help your running and other pursuits.

Another thing I’d like to say is that I sent you the yoga nidra book as a get-well present to help you recover from the stroke and give you a delicious yoga experience without having to practice mere postures, as is what’s commonly emphasized these days. If you turn to the very last page, you can register the book and have access to free downloads to the 3 primary yoga nidra practices featured.

So carry on, good fellow! Love – your yoga coach.

P.S. By the way, a triathlon would be way harder than any yoga I did last year-or ever!

I found this advice encouraging, motivating and just delightful. Most of all, I picked up on this comment in Julie’s response: “The only posture needed for what’s in my book is lying on your back.”

Now that put a whole new perspective on yoga in general and yoga nidra in particular. Maybe I didn’t have to meet the Cirque du Soleil standard to succeed at enjoying yoga. Now I was ready to read Julie’s book in earnest.

Learning to Understand and Enjoy Yoga

When I next settled down to read Yoga Nidra, finally past the blurbs and such, I encountered Julie’s opening sentence-a revelation I will long remember: “Did you know that yoga can be practiced without performing physical exercise?” A yoga washout, I was also cheered, as noted a moment ago, by the next sentence-“that meditation can be done lying down instead of sitting up still and straight like a statue.”

I did not realize that such points of view were held by yoga experts. Both sentences were revelations, almost Dickensonian in memorability, such as, “It was the best of times, it was the worst of times… ” From Julie’s two sentence beginning continuing throughout the 205 pages that followed, “Yoga Nidra” managed something I wouldn’t have expected of a yoga book-it held my interest.

Among the strengths of Yoga Nidra is the comprehensive information on the nature and dynamics of the phenomenon of stress. The treatment of stress incorporates creative techniques for managing it, even turning negative (as well as positive) energies to advantage via relaxation, guided imagery, meditation and disciplined thinking.

On occasions, I’ve wondered if yoga is mostly an art, a science, a skill, a discipline, a branch of knowledge or what? While that answer did not come right away, a related and welcome one did, namely, that yoga is not a religion. That I never doubted, despite jejune attempts by some religious zealots to defame it as such. Still, I welcomed the fact that Julie gave this looney notion short shift. While Julie assures those so inclined that people of all faith traditions can benefit from yoga, she added that “it supports their religious convictions in genuine ways.” Well, that’s nice, I suppose, but equally important is that it does not resort to or rely upon faith (i.e., “believing what you know ain’t so” according to Mark Twain) but rather that yoga is supported by ample research that underscores its healthful properties.

As with the 25 blurbs spread over eleven pages before the reader reached the start of the 205 page book by Julie Lusk, I think there are too many personal stories by yoga enthusiasts (not identified save for first names). These testimonials inhabit excessive space and slow the pace of learning. How many readers need continuous cheer leading from those who found yoga helpful? On the other hand, I suppose it’s possible many other readers will welcome this feature. I found it akin to advertising-at times I would have liked to have the literary equivalent of a remote device to mute or fast forward past the effusive commentaries.

Other positive features of Yoga Nida were 1) the guideline sections for making positive changes, 2) the extensive tips for establishing a regular pattern of practicing yoga and creating a home culture that supports enjoyable and healthy lifestyles and 3) the chapter on revitalization. Finally, readers will surely appreciate the extensive references and resources section particularly the audio files that Julie made available as free downloads to complement texercises provided in the book.